Hello and welcome to The Greenkeeper! Today is Friday, November 5th and tomorrow play begins as Carolina Golf Club conducts the 20th Carolina Invitational. Founded in 1999, this will only be the second time the championship has been contested in the past four years. The tournament was not held last year due to the pandemic and it took a hiatus in 2018 when we co-hosted the United States Mid-Amateur Championship.

As a result, some of you may be asking, "What is the Carolina Invitational?"  Funny thing is, it's a question I have answered before in this very space.  You're Invited was written in 2012 to help those members who joined after the  2007-2008 restoration better understand the origins of the event.

Earlier this week I had a similar conversation with a member and realized with two years off in the past three, there  once again may be folks that do not know the story. Thus it became time to share the older post once more. I can tell you this year's field may very well be the strongest ever as 17 participants competed in USGA Championships in 2021!

One of those is Carolina's own Hayes Brown! It was just barely a month ago when Hayes was the last player to make the match play field of 64 at this year's U.S. Mid-Amateur at Sankaty Head Golf Club in Siasconset, Massachusetts. Hayes holed a wedge for an eagle 2 to win a 6 for 1 playoff and secure that final spot. He then went on to advance farther than any previous 64 seed in the event's history Click Here before succumbing in the semifinals to eventual champion Stewart Hagestad.

Hayes and Sean Snell are the defending Champions from 2019. You may recall Hayes won his second club championship last month on the heels of that thrilling U.S. Mid-Am performance and earlier this summer Sean advanced to the final round of this year's City Amateur Championship, so they're both coming into the event in fine form.

In 1927 with the help of O.B. Keeler, Bobby Jones wrote Down the Fairway. And it is right there in the opening paragraph of Chapter One that he clearly states there is a difference between the golf most of us play on a regular basis and tournament golf. 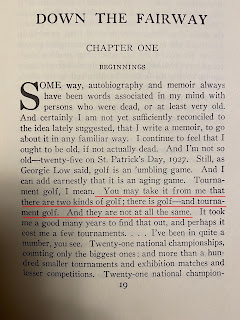 "You may take it from me that there are two kinds of golf; there is golf - and tournament golf. And they are not at all the same."

I close with the same sentiment expressed nine years ago. My team and I strive each and every day to prepare and present your golf course at its very best for the enjoyment of you, your families and guests. But it is nice once in a while to have the opportunity to showcase your golf course on your behalf to those that play a different game.