Hello and welcome to "The Greenkeeper"!  Today is Tuesday, October 18th and Fall Member-Guest week is upon us.  But before we kick off the festivities beginning Thursday and concluding with the Shootout on Saturday afternoon, I would like to recap several events that have taken place the past three weeks.  Seems like just yesterday conditions were very dry and our irrigation reservoir was fast approaching a deficit equal to last year.  In fact on September 25th we were approximately 10 feet below full pond, basically the same level at this time last year.  Today the lake sits approximately 1 foot below capacity thanks to 9.5 inches rain that fell between September 26th and October 8th. During that two-week stretch the golf course endured a flash flood event, followed by several other heavy rains, then capped with an all day rain courtesy of Hurricane Matthew (no relation).

Believe me when I tell you it is bittersweet to report the rainfall associated with Hurricane Matthew was helpful when so many North Carolina residents east of I95 are encountering flood levels not seen since the aftermath of Hurricane Floyd in 1999.  My heart goes out to those folks and to my fellow golf course superintendents along the Georgia and South Carolina coasts dealing with massive tree and debris cleanup.  Mother Nature is am imposing force that never ceases to amaze.


Recently I placed some new signage at the Driving Range Tee.  Hopefully you have seen it, and more importantly attempted to follow its message.  The purpose of the signs (there are two of them) is to help guide everyone during their practice sessions so that usable turf is maximized.  The sign below depicts a typical "scattered" divot pattern  in the lower right while the lower left depicts "strips". 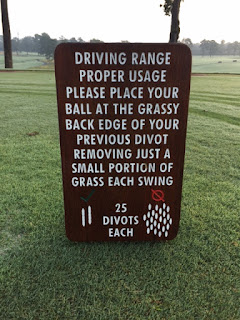 For the past few years I have tried to convey the importance of this message CLICK HERE because quite simply, despite possessing just over one acre of driving range tee space, it is not enough turf to accommodate everyone throughout the year.  By learning to take divots via this method less turf is consumed leaving more for the the next person, or better yet, next day. 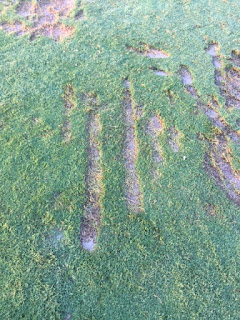 I bring this to your attention again now because we are just three weeks away from entering our off-season and our range policies this year will differ slightly from last.  Last year you recall we overseeded the entire primary range tee (upper and lower tiers) then renovated the teeing area this summer via Fraze mowing.  This year the Committee decided to overseed the lower tier only, and be open Fridays-Sundays (weather permitting).  Tuesdays-Thursdays the artificial mats will be used. The upper tier of the primary range tee and back range tee will be closed all winter to preserve and protect the turf through the winter season.  It's important everyone hitting balls on the lower tier this winter try their very best to follow this guideline, otherwise the turf will be consumed too quickly and we will be required to utilize the mats every day of the week until next spring.

In other news, the last two days of September were spent meeting with the USGA as we begin preparations for our role in the 2018 US Mid-Amateur Championship.  Hopefully you recall Carolina Golf Club will serve as the Stroke Play Co-host as Charlotte Country Club hosts the 2018 tournament CLICK HERE, now just a little over 700 days away.  On September 29th we met at Charlotte Country Club to review the Hosting Manual, a 104 page document that covers everything imaginable and then some.  The next day Bill McCarthy, Director US Mid-Am Championship spent the entire morning touring Carolina Golf Club.  We went through the entire course hole-by-hole from teeing ground, to landing zone, to green complex.  Mr. McCarthy was very complimentary of the golf course, especially the putting green complexes.  He made several suggestions to our current mowing patterns and presented them a few days later in a 10 page document using images from Google Earth.  Basically the requests are bringing in the fairway a few feet here and there on some holes while expanding the closely mowed area surrounding the greens on others.

I met with the Greens Committee two weeks ago where we reviewed Mr. McCarthy's course prep memo.  We discussed each of the proposed changes and what impact, if any, these tweaks and adjustments would have on the membership.  It's impossible to know until we try so for now the plan is to implement these mowing pattern alterations next spring as the bermudagrass is breaking winter dormancy, then the USGA will return next fall to review and we will go from there.

And finally, in more alphabet related news.  The GCSAA has 98 affiliated chapters of which the Carolinas GCSA is one.  As a member of the Carolinas GCSA Board of Directors I was asked to serve as Chapter Delegate this year and proudly accepted the honor.  Last week was the annual Chapter Delegates meeting in Kansas where each affiliated chapter sends one delegate to meet with the national Board of Directors, association executives and staff to discuss the important issues facing our industry.  PRESS RELEASE

It was definitely an eye opening experience to peek "behind the curtains" of our national association, now celebrating it's 90th year (CLICK HERE).

Well, time to get back on the course and polish things up before our guests arrive.  Fall truly is the best time of year for golf at Carolina Golf Club as evident by the colors and contrasts depicted in the photos I tweeted below!

Staff did an awesome job while I was away! Course is on point & ready for this weekend's @CGC1929 Senior Championship! 👍🏻👍🏻 pic.twitter.com/e0XTz677FV
— Matthew Wharton (@CGCGreenkeeper) October 14, 2016

Posted by Matthew Wharton, CGCS, MG at 8:03 AM No comments: