It's a Small Golf World!

Hello and welcome to The Greenkeeper!  Today is Friday, April 16th and my heart and soul goes out to the entire Virginia Tech community on this remembrance day.  So much has happened since my last post.  The Easter Bunny returned to Carolina Golf Club, Hideki Matsuyama won the Masters and Will Zalatoris continues to be the hottest golfer on the planet without status!

Spring continues to be a roller coaster in our region as the golf course continues to wake from winter hibernation.  Although many mowing operations have returned, the frequency is less than peek growing season as cold snaps continue to slow progress.  In fact, we are experiencing another cold snap as temperatures this morning dipped to 41 degrees F.  The graph below depicts the daily average temperature at CGC from March 1 through April 15 (yesterday).

Although in Centigrade, it is easy to see the rapid dips followed by the gradual warm ups that characterized March.  This past week has seen the steadiest of temperatures from day to day, which is nice considering we experienced frost on the first and second of this month!  It will be interesting to revisit and see how the back half of April shakes out.

If asked to compare the course to years past, I would say things are about average.  We have definitely been greener and farther along with growth some years, but I would also say there have been plenty other years where the course was lagging behind 2021.  We have made two mowings to all the rough to open the canopy, and you can see plenty of new green leaves emerging from under the remaining dormant material.

Landscaping should be wrapped up today as all on-course mulch areas have been tidied and refreshed.  We addressed all the clubhouse and parking areas prior to Easter.  Tee box realignment (you may have noticed blue dash marks along the edges) continues to progress and I marked all the fairway edges too as some areas between fairway and rough have become blurred due to heavy cart traffic associated with record rounds.  In fact, through March 31 rounds are up more than 12% over last year with over 5000 rounds played since January 1!

You may recall some time back I mentioned this past winter was the coldest in our region in six years.  I do think we are now far enough along into spring to recognize areas that are slow to recover as a result.  Most notably the high cart traffic exit points and the rough on the north side of large trees.  Not to worry, they will recover, they're just stumbling out of the starting block.

Things could be worse, the hard freeze that gripped the central southern region this winter has Southern Hills in Tulsa, Oklahoma patching and replacing damaged turf areas much sooner than normal years after the turf succumbed to freezing cold and north winds.  The Perry Maxwell masterpiece was recently restored by Gil Hanse and they are scheduled to host this year's Senior PGA Championship at the end of May.  I tip my cap to superintendent Russ Myers and his team as they battle the elements, just another example of how Mother Nature always wins. https://golfoklahoma.org/southern-hills-moves-to-erase-winters-bite-marks/

Before I go, let's go back to last week's Masters.  Hideki Matsuyama became the first male golfer from Japan to win.  When I was growing up watching the Masters was the one time each year I got to see Japanese legends like Isao Aoki, Jumbo Ozaki, and Tommy Nakajima play.  Ok, so Aoki did play and win on the PGA Tour, but mostly the Masters was the only time Americans really got to see these legendary players compete.

At the conclusion of this year's Masters the golfing world was touched when Hideki's caddy respectfully bowed to the course.

I can tell you I was not at all surprised by this gesture.  From January 2000 to April 2002 I was the Assistant Superintendent of Augustine Golf Club in Stafford, Virginia.  And at that time Augustine was owned by a Japanese businessman named Tadahiko Nukui.  We had a full-time translator on site, Fumio Jenkins and when possible I would ask her questions about Japan and Japanese culture.  I learned that golf courses are considered sacred ground and the course is treated with the utmost respect. 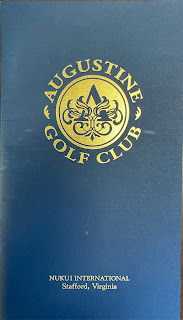 In fact, Augustine Golf Club operated as a Cart Path Only facility 365 days a year.  If you had a physical disability that required you taking your cart off the path, you were only permitted to ride in the rough, never on the fairways.  Mr. Nukui and his family would visit Augustine two or three times each year and it was a great learning experience early in my career.  Mr. Nukui also owned and operated two courses in Japan, Green Park Country Club and Sendai Minami Golf Club.

I left Augustine in the spring of 2002 to take my first head superintendent position, and unfortunately lost touch with the Nukui family.  In fact, Mr. Nukui eventually sold Augustine Golf Club but in May of 2000 we did host a professional tournament for the Tear Drop Tour.  A few young players you may recognize competed in that event are Jason Gore and Zach Johnson.

I remember there was a three-way sudden death playoff involving Tim Petrovic, a player I cannot remember, and the eventual winner, Stephen Woodard.  Yes, our Stephen Woodard! 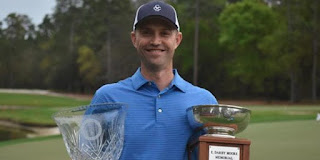 So there you have it, somehow through the greatest of all games we find ourselves connected to the reigning Masters Champion, Hideki Matsuyama.  And now you know, the rest of the story.

Posted by Matthew Wharton, CGCS, MG at 11:30 AM No comments: