Taste of Victory, State of the Union, No Balls and New Faces

Hello and welcome to "The Greenkeeper"!  Today is Friday, January 27, 2012 and this is my first post in - in 17 days! Sorry!  I don't have an excuse this time so we will just move on to the portion where I brag about my golf fantasy team.  I would be remiss if I didn't give a shout out to Mark Wilson, winner of the PGA Tour's 2012 Humana Challenge and member of my golf fantasy team...wooohooo!  It's been so long since my fantasy partners and I have had a winner we don't remember what victory tastes like so last week was a pleasant surprise!

It was a pleasure to once again present the Greens Committee "Year in Review" at the Annual Meeting this past Tuesday.  It is never easy to give such an important address opposite the President's State of the Union but I think overall, my message was well received...at least it did not require a Republican response.  In case you were unable to attend, the entire presentation is available (contact Roger Wolfe) and if you have any questions regarding the information contained in any of my slides do not hesitate to contact me.

I was asked about the recent disappearance of practice balls at the short game area during the Annual Meeting.  My apologies for not addressing this issue in this forum sooner but the decision was made by both the Golf Committee and the Greens Committee to remove the den caddies from the short game area during the winter off-season.  Over the past three years when the driving range tee is closed for use during the dormant period some individuals have used the turf at the short game area for full shots (warm-up and practice) causing great damage to the short game area and hindering its winter recovery.  It was determined if the practice balls were not readily available this would serve as a deterrent to this type of behavior.  You are welcome to use the chipping green and practice bunkers but the unlimited supply of practice balls will not be reinstated until spring.  Until then, you will need to use a ball or two or sleeve of three to chip and putt.  Thank you for your understanding and cooperation!

In other news, if you have been on the course the past two weeks you may have seen some unfamiliar faces on the golf course maintenance team.  I recently added two new hires to my staff and I would like to introduce them to you now: 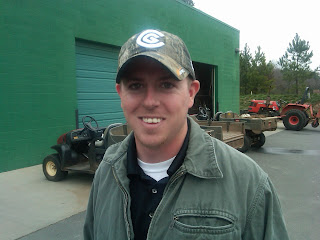 Chad Taylor is originally from Florida.  His family moved to Monroe, NC when he was 8 years old.  He is a 2007 graduate of Sun Valley High School in Monroe where he studied Advanced Turfgrass Management.  Chad previously worked in the landscaping industry before a stint at The Club at Longview in 2009 led to a position on the maintenance crew at Providence Country Club where he spent the past two years. 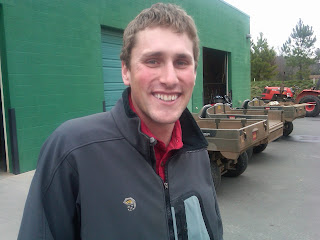 Brett Stowers is a native of Virginia and recent (2011) graduate of Virginia Tech's Crop & Soil Environmental Science program (yes, more Hokies!).  He interned at the Olde Farm Golf Club in Bristol, VA in 2010 and most recently working as the 2nd Assistant Superintendent on the Manakin Course at Hermitage Country Club in Richmond, VA.  Brett relocated to Charlotte to be with his "soon to be fiance", Michelle who works for Balfour Beatty Construction as a project engineer.  Brett is my new Assistant in Training.

Posted by Matthew Wharton, CGCS, MG at 11:24 AM No comments:

Hello and welcome to "The Greenkeeper"!  Today is Tuesday, January 10, 2012 and this is my first post of the new year! ...sorry for the delay.  I sincerely hoped to have posted long before now however I am blaming a period of winter solstice induced depression prolonged by cold and flu viruses, Christmas overeating and field goal kickers.  I am happy to report my "funk" finally receded like Jonathan Byrd's hairline and I am now "Back in the Saddle" so here we go!

Sometimes I think if I wasn't an agronomist and a golf course superintendent I might have been a meteorologist.  Of course my profession as your golf course superintendent necessitates my constant weather watching and who knows if I would even have an "inner Jim Cantore" if I had pursued other career options.  Regardless, I found it interesting to note 2011 ended as the second wettest year during my tenure at CGC with 48.79 inches total rain.  The most was when 2009 brought us 54.77 inches rain.

At this time I would like to close with something new and useful.  Many of you enjoy walking the golf course with the aid of your pull, push, motorized carts or as our good friends who invented the game say...trolleys.  I am all for the use of trolleys on the golf course and admire each of you that walk this golf course on a regular basis.  However the putting surfaces are no place for trolleys and I want to remind everyone to be careful not to take your trolley across the putting greens.  Yes, tracks were noticed and identified and that is why I am posting this today.  Someone made an innocent mistake and I merely want to prevent it from happening again.  Thank you for your cooperation!

The Greens Committee will be meeting this coming Friday (January 13th).  Look for my next post to follow a few days later hopefully with something exciting to share.  Until then...