Hello and welcome to The Greenkeeper!  Today is Tuesday, August 25th and I have received a few questions following this morning's post about our recent SubAir installation on Hole 12 so I thought I would provide a little clarification.  Many of you probably recall seeing the image below in a member email on March 6th when we announced the decision to install SubAir on Hole 12 this season. 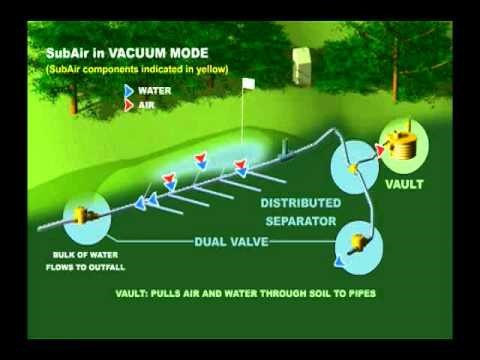 The components of the SubAir system in the above picture are the Vault, Separator, and Dual Valves.  They are connected to the green's existing internal drainage network.  I think based on the questions I have been receiving many of you thought everything depicted needed to be installed and you were left wondering how we managed to do so without disturbing the putting green.

All 22 of our greens on property are USGA Construction with internal drainage.  They already possess a network of 4-inch dual wall perforated pipe aligned in a herringbone pattern beneath the rootzoone.  That network then connects to a single solid pipe which carries excess water away to the nearest catch basin before it is transported to the nearest retention pond.  From the as-built legend below you can see our bunkers also have internal drainage.

Below is Hole 12 and you should recognize two main "trunk" lines.  Recall there's a ridge at both the front and rear of the green separating the two halves.  For this project we only needed to locate the terminal ends of the two trunk lines at the back of the green and make our connections.

And this next photo shows us installing new pipe from the vault and separator up to the back of the green connecting to those existing internal drain lines. 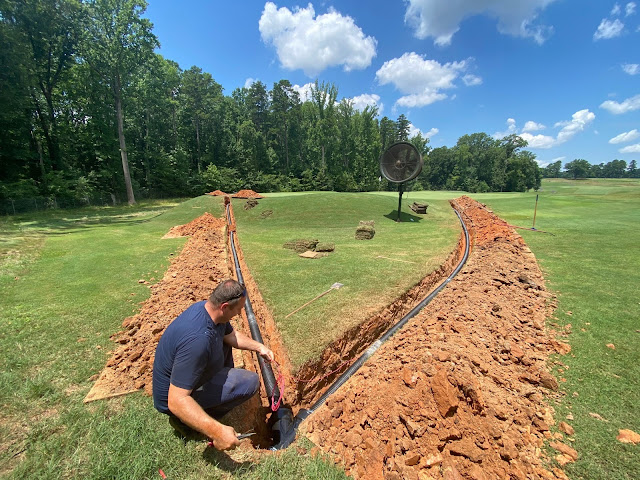 Hopefully that clears up any confusion.  For a little more info on how the system operates once connected here's a brief product video explaining the benefits of vacuum and pressure mode.  I've been using both since we got power connected fifteen days ago.  If you have any other questions please don't hesitate to reach out, I love talking turf!

Posted by Matthew Wharton, CGCS, MG at 12:36 PM No comments:

Hello and welcome to The Greenkeeper!  Today is Tuesday, August 25th and for the first time in months the team and I are beginning to feel like we are catching up!  Between record heat and drought, projects, and recent heavy rainfall, at times it felt like we were running in place.  I think this past Friday was the first time I found myself breathing a sigh of relief as the last pieces of new sod went on the ground to button up a few undesirable areas.  Here's a look back at the work helping usher in fall. Yes, September 1st, the start of meteorological fall is only one week away.  ;)

At the first of this month we were still in the grips of a heat wave with unbearable humidity and elevated nighttime temperatures.  As a result, we battled some fungal pathogens on our creeping bentgrass greens that called for treatment.  The right combination of curative plant protectant applications in conjunction with our fans, including the portable used at hole 9 made a tremendous impact and we successfully turned things around.

Now obviously we didn't place the fan in front of the green during play, but we did take advantage of a closed course on Maintenance Mondays to reposition and get better airflow to the far side.  Our recent reprieve from the intense heat allowed us to remove the fan temporarily but you will most likely see it returned tomorrow as temperatures are expected once again to rise into the 90's and remain through this coming weekend.

Prior to August 15th the golf course had only received about 3/4 inch total rainfall this month.  Then the tropical downpours hit that same Saturday afternoon dropping over two inches!  In fact, since the 15th we've had eight measurable rain events totaling 4.6 inches and bringing our monthly total up to 5.39 inches.  That is more than June and July combined (5.21 inches).

With the recent wet period it sure is nice having the new SubAir unit on Hole 12 operational!  Big thanks to the folks at SubAir/TurfBreeze for all their assistance in getting us squared away on our most challenging microclimate.  The vault is behind the green in the native area.  We wrapped up this project by topdressing with compost and reseeding with Spence Blend fine fescue.  The unit has been quickly put through its paces as noted by the rainfall just in the past ten days.

With that off our plate we focused on wrapping up the final fairway topdressing for this season.  Between August 10th and 12th we spread 300 tons of utility sand across our 30 acres of tees, fairways, and approaches.  This application brought our grand total since inception in 2015 up to 3900 tons or 130 tons per acre.  Thankfully we had dry weather while spreading and the plentiful rainfall since has sufficiently helped work all the sand into the canopy.

Still slinging! One of only five remaining fairways to topdress today! Should wrap up shortly after lunch. Another 300 tons spread (10T/A). 😏 #SandMan pic.twitter.com/Zi5pa49sgP

You may recall last time I referenced how we changed grass types on the back tee of hole 13.  We selected Zorro Zoysiagrass for the enhanced shade tolerance as that tee abuts the southeastern property boundary.  This was the same turf used for the newly installed "lawn space" adjacent to the swimming pool.  The new sod rooted in quickly and the tee markers were returned and the tee reopened for play twelve days ago. 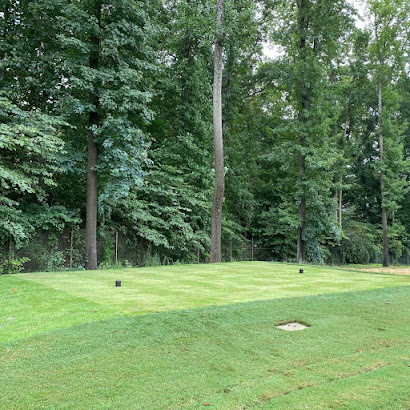 In other news we vented greens (needle tines) on August 17th following the Saturday deluge.  It was one of the final tasks our summer intern, Jarrett Price completed last week before heading back to West Lafayette, Indiana for the start of fall classes at Purdue University.  JP was a big part of our team's success this summer and we wish him all the best as he continues his studies.  And hopefully he decides to return next year so we can continue his Jedi training.  :)

It’s our last week with turf intern Jarrett Price from @PurdueAg! Such a delightful & hard working young man! Nice of him and the assistants to invite me for a game! #CGCturf #BoilerUp pic.twitter.com/UEo7s2z6vT

Well, that's about all for now.  Dustin Johnson destroyed the field in the first FedEx Cup tournament winning by eleven strokes!  The tour heads to Olympia Fields this week for the BMW Championship then next week they head to Atlanta and East Lake Golf Club for the Tour Championship!  Following a week off after the Tour Championship we get the US Open at Winged Foot!  I don't know about you, but I think it's an exciting time for professional golf!