Hello and welcome to The Greenkeeper!  Today is Thursday, September 17th and the beginning of the 120th United States Open Championship at Winged Foot Golf Club.  I don't know about you but that sounds bizarre to me, a U.S. Open in mid September.  2020 just continues to defy all things we had come to know and expect.

It's just a little before 6:00 am and light rain is falling at Carolina Golf Club.  I received a text yesterday afternoon from a member asking if I thought we would "get pounded" with rain all day.  I replied that's what all the experts say.  If you aren't aware Hurricane Sally made landfall along the Mississippi Gulf Coast yesterday morning and is now tracking northeast.  Charlotte is under a flash flood outlook through tomorrow and estimated rainfall totals could equal anywhere between 3 to 7 inches.

This isn't the first tropical system to pass across the North Carolina Piedmont and it won't be the last.  It was just two years ago Michael made landfall along the Florida Panhandle as a Category 4 storm and then made its way to the Queen City prior to our Fall Member-Guest.  Yes, that is the same year Florence made her presence felt just prior to the U.S. Mid-Am a month prior.

I'm sorry if my view of Sally is a little jaded, but when we've experienced rain events the past two years that led to totals just shy of 60 inches each year (Charlotte only averages about 40 inches yearly), you can understand why I view this as just another rainy day at the course.  Like with all weather systems, we prepare the course to come through the event as best as possible and fingers crossed any potential damage will be minimal.  My understanding there is not a high wind threat with Sally so I expect today to be soggy, all day.

Considering I was watching Mat Goggin hit lob wedges yesterday, he was landing the ball short of the first target green on the right, and the ball was bouncing twelve feet or more in the air before landing on the green and stopping near the hole.  Yes, it has been relatively dry the past two weeks with less than two-tenths inch rainfall over the past fifteen days, so we could use, and the course is ready to take on a good soak.

Since my last update it looks like Summer left town for the season.  I had an exchange with our good friend Brad Panovich on Monday.  He had shared this graphic with me prior to the Member-Member when we hit 90 plus degrees on Wednesday, Thursday and Friday before the holiday weekend. 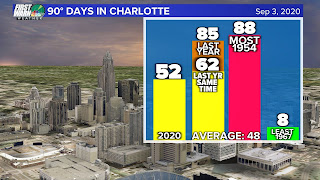 I asked where we stood for the year and he informed me after hitting 91 degrees officially on September 11th we were now at 54 days for 2020.  Think about that for more than a second, 54 is 31 fewer than last year's total of 85.  That's an entire month less of oppressive heat, and we're thankful.

Fans have been removed from the course and stowed for the season.  Height of cuts have been adjusted slightly on our Bermudagrass surfaces and we have a potash fertilizer application upcoming as we prepare the plant for the approaching dormant season.  We will also be making fall preemergent herbicide applications as well as Spring Dead Spot preventative fungicide application soon.  Our work is never done. :)

So, today is the first round of the 120th United States Open at Winged Foot Golf Club.  I believe most of you when you hear the name Winged Foot either think of 2006 and Phil Mickelson blowing a one-shot lead on the 18th hole of the final round, or you think of the Massacre at Winged Foot, the 1974 U.S. Open won by Hale Irwin with a score of 287 (+7).

Both the East and West courses underwent restoration/renovation under the supervision of golf course architect Gil Hanse in recent years so this year's championship will look different for any competitors that teed it up in 2006.  There's been some great content floating around the web leading up to this tournament showcasing the course, the '74 massacre mentioned earlier, and even a behind the scenes look at the grounds crew produced by Barstool.

But to have a better understanding of the challenge the competitors face I suggest you watch this brief video produced by Andy Johnson of The Fried Egg Winged Foot West Greens where Gil Hanse and 2006 U.S. Open champion Geoff Ogilvy discuss the difficulties and complexities of these A.W. Tillinghast putting surfaces.

Oh, and don't forget, Carolina Golf Club is forever linked to Winged Foot lore thanks to the stellar play of our own Stephen Woodard and Brett Boner back in 2018. :)  Stay dry today and enjoy the U.S. Open at Winged Foot.  I don't have a prediction other than the course will win and the winning score will be over par.  I would gladly take four rounds of 71 and wait inside that lovely clubhouse, wouldn't you. ;) 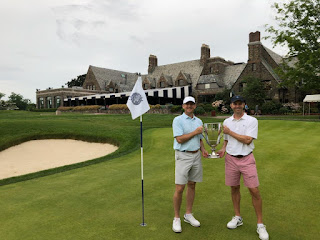 Posted by Matthew Wharton, CGCS, MG at 7:01 AM No comments: