Hello and welcome to "The Greenkeeper"! Today is Wednesday, January 29th and the golf course is covered in snow!  I don't know about you but I love the look of a snow covered golf course...something peaceful and serene about the fluffy, white blanket on the ground.  Yesterday's winter storm left us with just over 1 inch of the white stuff on the ground and this arctic blast may keep it around a couple of days.


While we are on the subject of the weather, this has been the coldest winter the U.S. has seen since the late 1970's.  The chart below depicts the average temperature for meteorological winter (December 1st - February 28th) over the past 119 years. 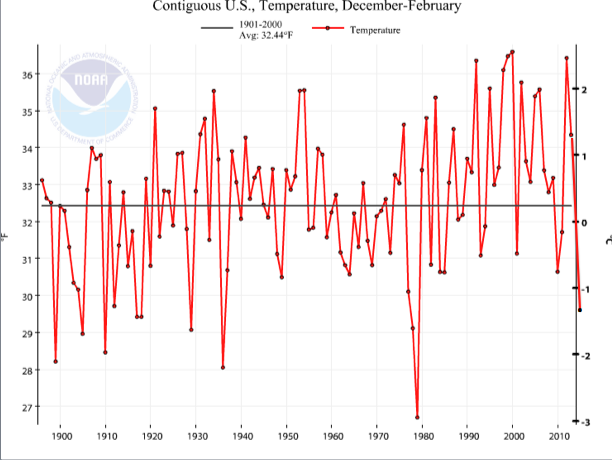 A close look will reveal as recently as 2010 the country endured its coldest winter since the winters of 1984 and 1985, and this winter has already surpassed all three of those just mentioned.  This current blast of arctic air will most likely send this winter past that of 1978, and depending on how February plays out, quite possibly the winters of 1905 and 1929 too.  All that means this could potentially become at least the 5th coldest winter the U.S. has endured in the last 119 years.  Thank goodness for global warming or who knows how cold it would have been this year!

Now, let me clarify this data reflects the entire U.S., not just the southeast or North Carolina, so please keep that in perspective.  Also, I do not bring this information to your attention simply to satisfy my inner weather geek, nor do I have stock in heating oil, natural gas, or propane.  I bring this to your attention because we have over 90 acres of bermudagrass growing on the golf course, and bermudagrass is a WARM-SEASON grass.  In other words, it doesn't like cold.  The terms winter injury and winter kill get mentioned quite often in turfgrass circles during cold winters, and above I referenced 2010 was the last cold winter seen in these parts.  In the spring of that year we experienced some winter related injury and death to parts of the golf course.  Most notably to portions of the collars where the topography tilted North, North-facing bunker slopes, shade affected tees on the 6th and 9th holes, and a shady area on the right side of the 1st fairway.

I am not saying we are going to experience widespread death of bermudagrass, but I do want everyone to realize and understand the extremes Mother Nature has brought upon us this year certainly point to the potential for some winter injury and possible winter kill of turf located in the more extreme micro-climates on the golf course.  On the bright side, I was expecting a colder than normal winter this year thanks to a new weather information resource.  I believe it was late October/early November when I first began to receive forecasts predicting the patterns that have brought us wave after wave of cold Canadian and arctic air this year.  My staff and I took these warnings seriously and placed covers on certain sensitive areas that previously experienced winter related problems to minimize any potential damage the course may encounter this year.  We have also taken precautions throughout the winter to try and protect our turf whenever possible, such as using turning boards to protect the collars from compaction associated with turning mowers and rollers changing directions.  Also, this past Monday we irrigated the golf course to combat potential desiccation associated with these extreme arctic blasts, because extreme cold equals dry and it's the dry that can be the real problem in these conditions.  We are in the middle of what is historically the coldest week of the year, so hopefully the worst is nearly behind us and here's hoping it's cloudy on Groundhog Day...we don't need any groundhogs seeing shadows!

In other news, the construction project at the back of the driving range is coming along quite nicely. The shaping and rough grading is complete.  Next up is internal drainage and irrigation installation. Once that work is finished the tee will be capped with a 4-inch layer of sand to create the finish grade and then be ready for sod.  Here are a few photos of the work thus far, and you can follow me (@CGCGreenkeeper) or Golf Course Services (@GCSofNC) on Twitter to see and read these updates as they happen in real time.

Shaping of new Family Tee back of DR Carolina GC! Will be a nice place for the kiddos come July! # pic.twitter.com/D4gRA0jj0I
— Golf Course Services (@GCSofNC) January 25, 2014

Finally, next week I will represent Carolina Golf Club at the 2014 Golf Industry Show in Orlando.  I am scheduled to be in two seminars early next week and then I will be attending the industry's largest trade show on Wednesday and Thursday.  I will be tweeting about my experience for those of you following along, so look for #GIS14.

Hello and welcome to "The Greenkeeper"! Today is Friday, January 17th and it has been 4 weeks since my last update.  Four weeks is a long time in this business, and a lot has happened, but not much has changed either.  Confused?  Let me explain.  Thanks to Mother Nature the golf course is still dormant, and still WET!  We wrapped up December with 7.48" rain for the month (#soggy)!  The first two weeks of January has brought another 2.58" rain and some bitterly cold temperatures (remember the record low of 6 degrees last week).  Needless to say we have been bundled up and #CartPathOnly for some time now.  However, despite a slow down over the holidays and the weather conditions turning unfavorable, my staff has managed to keep the golf course in exceptional condition and Golf Course Services has completed the bunker renovations.

During my last post I referenced how @GCSofNC (for you Twitter folks) had been knocking out our bunker renovations at warp speed.  At that time they had surpassed 50 bunkers.  I am happy to report to you bunker renovations finished today!  GCS completed renovations to the large practice bunker, located in the short game area between the practice putting and chipping greens earlier this afternoon.  The renovations to this bunker were slightly more involved than the others, because practice bunkers age exponentially compared to on course bunkers due to their continuous use.  As shot, after shot, after shot is hit from the practice bunker the constant "blasting" of sand displaces a large amount onto the grass bunker face.  Despite continuous efforts to remove the sand build up from the grass face, layers do develop in the soil over time and cause turf problems.  Thus, all the turf was completely removed from the bunker face, the sand layers stripped and removed from the original soil bunker cavity, and new sod installed.

With bunker renovations now behind us our attention is solely focused on the new tee construction projects I referenced last time.  Earlier today I met with our architect, Kris Spence along with JD of GCS to look at the new championship tee construction on hole 13.


When finished, the three of us explored several new teeing options for holes 14 and 18.  The Greens Committee asked Kris some time back about the possibility of joining the back tees of the neighboring holes together in a similar fashion like on holes 6 and 8.


After that we rode down to the fairway bunker complex separating the 6th and 7th holes to explore the possibility of adding two or three more bunkers and a new mound or two.  Then it was lunch in the bar with some wonderful stories before calling it a day.  I must say it was a very enjoyable morning.  The whole process felt like old times, and brought back a lot of fond memories of the three of us working together during the master plan renovations five years ago!

In other news, I know some of you still don't follow on Twitter so here are a few highlights... and low lights you may have missed:

That's all for now, I need to put the finishing touches on the PowerPoint presentation I will be making at the 2014 Annual Meeting next week (Tuesday, January 21st).  As customary I will be recapping last year and giving everyone a glimpse of what to expect in 2014.  Hope everyone can make it!