Thick & Lush, Metallica & a Trip to the Spa!

Hello and welcome to "The Greenkeeper"!  Today is Friday, September 1st and although autumn doesn't begin for another 3 weeks astrologically, yesterday marked the official end of summer meteorologically (how weather records are kept).  The summer of 2017 (June-August) will be remembered at Carolina Golf Club for lush, thick, green conditions as rainfall (15.44 inches) was plentiful this year after two consecutive dry summers.  In fact, we received more rain in August alone this year (5.62 inches) than we did all of summer last year (5.54 inches).  The most common remarks and comments I've heard the past few weeks revolve around how thick and challenging the rough is this year.  I agree, it's as dense and uniform as I've ever seen it.  In fact, it's beautiful. 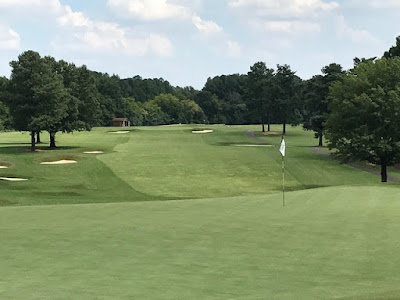 Now, before you assume my evil twin is laughing at your pain and suffering while you attempt to extricate your ball from the rough, I'm referring to the definition evident across the golf course because of the uniformity we've achieved this season.  Areas in the past where rough has struggled to grow because of either high foot traffic or repetitive golf car traffic managed to produce thick, dense turf providing a cohesive look across the property. 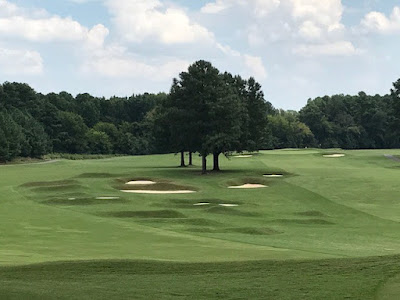 Even the teeing areas and bunker faces have a crisp, well defined appearance about them.  Perhaps the best comment I heard this summer came from one of our senior members about a month ago.  We chatted briefly after his round and he told me, "I know you like to be in control of the water, but the golf course never looked this good when you're in control."  Now you might think a comment like that would sting a little, but I understand where he's coming from.  Irrigation is actually only a supplement to natural rainfall, not a total replacement.  The past two summers we received very little natural rainfall taxing our irrigation supply and producing a very lean golf course which is a little less pleasing to the eyes of some.  I guess the USGA still has more work to do on the whole, "Brown is the New Green" initiative.


Of course with summer in the books my team and I will focus our attention on next week's greens aeration.  But that doesn't mean we aren't excited about preparing the course for this weekend's Club Championships.  In fact, we've been readying the greens for this coming weekend for the past several weeks.

We lowered the HOC on greens yesterday morning. Might be another adjustment in store before weekend is over. 🤔😉 #ClubChampionship #CGCturf pic.twitter.com/tUXjeWvbPN
— Matthew Wharton (@CGCGreenkeeper) August 31, 2017

Pay close attention to the time stamps on the two tweets above and you notice we've been at or below pre-summer mowing heights for the past three weeks.  We will make one more height of cut (HOC) adjustment this weekend in an effort to provide everyone the best possible playing conditions.  Of course the rainfall we received yesterday (0.62 inches) and the forecast for today will work against us to some degree but rest assured the putting greens will be smooth and the hole locations will be a fun challenge.

Before I get back to aeration I wanted to share two more items with you.  Recall last time I mentioned we postponed fairway topdressing until immediately after the week of the PGA Championship.  We applied 300 tons of sand to all tees, fairways, and approaches week before last, even yours truly got in on the action as we scrambled to complete the task after rain interrupted operations for two days.

We will make one more topdressing application before the season is over, but for now enjoy the smooth, tight conditions made more possible from this cultural practice.

My team and I are counting down the days until next year's U.S. Mid-Am.  We are just a little over a year away until we assist our neighbors on the east side testing the best career amateurs in the country.  As part of the preparations I had Patrick O'Brien, USGA Green Section Agronomist for the Southeast Region on site last Friday for a half-day visit.
Patrick and I spent about three hours together touring and examining all 18 holes.  We focused our attention mostly on the mowing pattern changes to the golf course, but also discussed the summer season and its impacts on turf health along with our cultural practices.  Afterwards my two assistants, Ben Albrecht and Matt Claunch joined Patrick and I for lunch and an educational discussion.  In all it was time well spent and I'm happy to report things are looking good on our end as we head into fall.

Now, back to aeration. Tuesday and Wednesday of next week the entire golf course will be closed both days to allow me and my greenkeeping team to aerate the putting greens.  We have 122,607 square feet of bentgrass (just a skosh shy of 3 acres) spread across 22 surfaces (1-18, Large putting green, Small putting green, Chipping green & Nursery green).  The process is very labor intensive with core removal, applications of soil amendments, sand topdressing and hand brushing but the end result is well worth it.  Think of it like a trip to the spa, the greens will spend two days getting deep tissue massage and other beneficial treatments readying them for our favorite time of year... fall golf at Carolina!