So, What Happened Was...

Hello and welcome to The Greenkeeper!  Today is Friday, July 30th and I need to explain what happened since my last update. June Recap

You may recall I wrapped up my last post sharing an Instagram post from Ran Morrissett, creator of https://golfclubatlas.com/.  Yes, that's an older photo of our third hole on their website.  Anyway, Ran had many nice things to say about our fescue that included a great picture of the thirteenth showcasing the contrasting colors and textures these natural/native areas provide.

Many of you were shocked to find these areas mowed down less than one week later.  So, what happened was not all our natural/native areas on the golf course are fine-fescue.  We have well over twenty acres of fine-fescue, tall fescue, broomsedge, bluestem, and grammas.  The fescues are cool-season grasses and we mow these areas annually in the late winter and early spring.  This is to remove the old, dead seed stalks from the previous year and allow for new growth.  The fescue typically produces its new seed stalk by May and they turn their desired golden color in early June. In fact, I highlighted the spring mowing in a blog update on March 26 Click Here.

The areas dominated by broomsedge and bluestem (warm-season plants) we mow each year in early summer for the same reasons, to remove the old, dead seed stalks from the prior year and allow for new growth.  The broomsedge typically produces its new seed stalk by September and turns a nice coppery bronze by October.  So, it really is a function of two different grass types performing the same function in various parts of the property.  The cool-season fescues do not perform well in full sun and southern exposures as our climate is too extreme, they function best under the protection of trees and north facing slopes.

Hopefully that clears us any confusion you may have been experiencing. Earlier this month we closed the golf course for 3 1/2 days following the observance of Independence Day on Monday, July 5 to perform intensive cultural practices to the tees and fairways. So, what happened was on Day 1 we performed a deep vertical mowing of the fairways and approaches. Simultaneously we core aerified the tees.

On Day 2 we continued with the fairway vertical mowing as that is a lengthy process, slowed even greater by the cleanup and removal of the massive amounts of organic debris. This year I refrained from taking the vertical mower on the steep slopes of the closely mowed green surrounds opting for solid-tine aerification immediately following the application of sand topdressing.

Once the fairways were clean of debris we performed a circle mow then topdressed with 15 tons sand per acre, followed by solid-tine aerification with 3/4 inch diameter tines. Drag it all in and you're ready for play!  I make it sound simple but the reality is these are very long days, and we appreciate the support to provide us with time to perform these beneficial practices.

Cleanup is with the Super 600 followed by a ⭕️ cut and 🚜 blow, then it’s ready for sand! pic.twitter.com/zLqC8zYePb

We first started topdressing fairways the summer of 2014 when we utilized all our old bunker sand following a replacement project.  In 2015 we made the commitment to invest in the equipment necessary to perform this task each season on a large scale.

To date we have applied 4,350 tons of sand over 30 acres.  That's 145 tons per acre for an average of just a little more than 20 tons per acre annually over the past seven growing seasons. And here's proof the process is working. 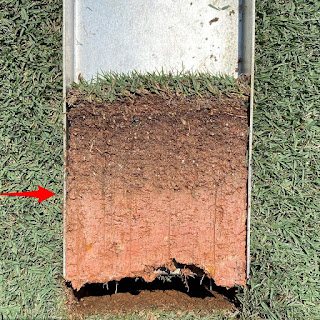 The red arrow above indicates the clay subsoil where fairway turf was planted in 2008, and you can see the accumulation of sandy loam now present following years of topdressing. Over time our fairways have gotten smoother, firmer, and we enjoy fewer cart path only days following summer thunderstorms.

Did I mention we were interrupted by a tropical storm? Elsa moved through Charlotte on the Thursday morning of our course closure, luckily the rain was light and we did not lose too much productivity. If you would like to see more photos or videos of the cultural procedures they're available on Twitter.  You might have to scroll through a good bit of Open Championship related info to get to them though. ;)

In other news this past weekend someone practiced their putting on the large practice green just a little too long. How is that possible you ask? Well, here is a photo I received Sunday evening inquiring about the prominent blemishes. 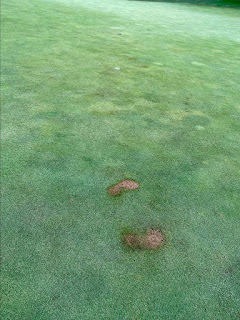 So, what happened was somebody stood in the same spot for far too long. I replied to my inquirer I see this at least once every summer as it happens during very hot, humid weather. The bentgrass is most susceptible to injury during extreme weather so the moral here is simply to move around and vary your practice to prevent it from happening.

Another way to think about it is like this, what does your backyard look like the morning after a barbeque with family and friends? Exactly, you can see all the traffic where folks played cornhole and congregated around the coolers with cold beverages.  Or, just think about the condition of Wimbledon's Centre Court at the conclusion of the championship's fortnight? That's all traffic stress. For the record I am not here looking to place blame but merely inform so everyone can take better care in the future and hopefully we won't see this again till sometime next year. ;)

Well, that's all for now. Time to grab the hose and check plant moisture levels cause we are still in the dog days of summer. Stay cool and stay hydrated everybody. Only 38 days till greens aerification, but who's counting. ;)