Hello and welcome to "The Greenkeeper"!  Today is Tuesday, March 7th and much has happened since our last time together.  Since returning from a very successful Golf Industry Show in Orlando, Florida your golf course maintenance team has completed all spring pre-emergent herbicide applications to our bermudagrass tees, fairways, and rough.  We recently began mowing all cool-season natural/native grass areas and we've made two fertilizer applications to the putting greens in preparation for aeration this coming Monday and Tuesday (March 13-14).

But before I get too far ahead, let's look back at the past two months in what was one of the most bizarre winter periods I've experienced living in Charlotte.  The first five weeks of 2017 was a roller coaster of temperatures as we would enjoy very mild temperatures during the middle of the week and colder periods on the weekends.

It's been an odd pattern since Jan 1st. Warm mid-week & cold on the weekends. These are the avg. temps by day since Jan 1st. #cltwx pic.twitter.com/nLa15vK4AE
— Brad Panovich (@wxbrad) February 6, 2017

After the roller coaster came to a stop February moved full steam ahead into Spring.  In fact not only was February 2017 tied for the warmest ever in Charlotte, but it was warmer than our normal average temperature for the month of March!
The mild temperatures contributed to confused plant growth as bermudagrass tried to wake from dormancy on more than one occasion only to be knocked back by the occasional frost.  Also, our bentgrass putting surfaces are awake much sooner than expected which hopefully translates to a speedy aeration recovery in the coming weeks.


Recently I acquired a new book about our favorite golf course architect, Donald Ross.  The book is called The Life and Times of Donald Ross and was written by Chris Buie.  Chris is a native of the Pinehurst area and resides in Southern Pines. 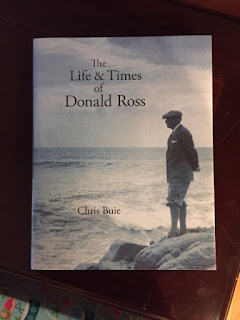 Although I acquired the book around Christmas with all of my recent travels I really only began to enjoy it this past weekend.  Imagine the thrill when I discovered Chris had discovered a newspaper article from 1933 telling the story of Mrs. Dunavant, the widow who hired Donald Ross to design Carolina Golf Club.  I reached out to Chris and he was kind enough to share with me a PDF of the syndicated story which he included in the book.

I think it's an amazing story that a recently widowed woman had the foresight to convert her dairy farm into a championship golf course.  Thank goodness she did or we wouldn't be enjoying our favorite layout today.  If you're interested in learning more about Mr. Buie's book you can CLICK HERE.

Tomorrow I am meeting with the Greens Committee and for the first time in over 6 years there will be a new chairman, Ed Oden.  It was a pleasure working closely with Stephen Woodard the past 6 years, and he has agreed to remain on the committee for continuity but a new era begins as Mr. Oden now takes the helm.  To his credit he has served on the committee for numerous years, even predating Stephen's tenure as chairman.  He is a golf historian, classic architecture enthusiast, and a course rater for Golf Week.  Our goal will be to bring everyone on the committee up to speed of all the renovation projects conducted in my tenure (believe me it's more than you think), our biggest challenges and obstacles we've had to overcome the past several years, and focus our efforts on making sure we present Carolina Golf Club to the participants of the 2018 U.S. Mid-Amateur Championship the best we possibly can.  It should be a fun meeting.


Friendly reminder the golf course will be closed this coming Monday AND Tuesday (March 13th & 14th) for greens aeration.  Once complete we will soon begin installing the anchor poles and trenching power to new fan locations (No.'s 2, Putting Green, & Chipping Green) approved by the Committee and Board last year.  Although March just arrived, summer is just around the corner!