Hello and welcome to "The Greenkeeper"! Today is Friday, October 25th and I want to discuss some important items with you.  You may recall last year in late November/early December we contracted with Golf Course Services, Inc. (GCS) to renovate a handful of greenside bunkers.  J.D. Downey and his crew removed the old, contaminated bunker sand, restored the original grass lines by installing sod and then installed new, improved bunker sand Labor Surge, Bunkers, Trees and Drought!.  The process only lasted about three weeks (11 bunkers total were renovated) but the impact has been dramatic.  Thanks to the positive feedback many of you have provided this past year with regards to the improved playability of the renovated bunkers, the Board of Governors approved the recommendation of the Greens Committee to renovate the remaining bunkers this off-season!

I can honestly say the biggest "complaint" or negative commentary received in my department or at the Greens Committee level is mostly about the bunkers.  The typical gripe is the bunkers are inconsistent.  This can mean several things such as the sand depth is inconsistent, the sand texture is inconsistent, the sand moisture content is inconsistent, etc.  In the past year since we renovated nearly a dozen bunkers my assistants and I have examined our maintenance procedures in order to identify areas where we may directly or indirectly contribute to these types of problems and we have been successful in making a few adjustments this year to ensure we are not a contributing factor to future bunker degradation.  However, over time bunkers and their playability do change regardless of the time and effort my staff spend attending them.  Recently the United States Golf Association's Green Section released a short video on sand bunkers and namely the reasons why bunker inconsistency is a consistent complaint on golf courses throughout the country.  I have shared it with you here... USGA Bunker Video.

The project is scheduled to commence Monday, November 4th so that is just around the corner.  We originally scheduled this project to begin in December but all parties agreed to move up the start time to allow for potential inclement weather delays since several long range forecasting models I review are calling for a colder than normal winter this year.  Anyway, our plan is to complete par 3 bunkers on Mondays when the course is closed.  When renovating greenside bunkers on par 4's and par 5's we will use temporary hole locations in the approach same as last year.  Temporary tee locations will be placed in the fairways when working on fairway bunkers.  We are taking these steps to avoid closing golf holes but also we want to allow GCS and their crew to perform the work without delay... and without having to dodge golf balls.  Bunkers will only be renovated on one golf hole at a time so as to minimize your disruption to the golf course.  Thank you in advance for your cooperation as we all work together this winter to make your golf course and playing experience better!

With our first frost of the season taking place yesterday and a hard freeze forecasted for tonight it is only a matter of time before our bermudagrass begins its annual winter hibernation.  The protocol with regards to the driving range tee and its use during the "off-season" is to close the natural grass teeing area after the end of Daylight Savings Time (DST) and all range participation takes place from the artificial teeing areas.  This year DST officially ends on Sunday, November 3rd thus we will be closing the range tee and utilizing the artificial teeing areas beginning Tuesday, November 5th (election day). 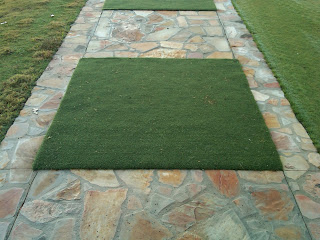 I wanted to inform everyone my staff has spent this past week working diligently on the artificial teeing surfaces.  Each 5'x5' mat was removed from its location and examined.  The base material under each mat was re-leveled and mats were reinstalled.  Before reinstalling the mats were shuffled throughout the tee line and rotated in order to provide a fresh area from which to hit golf shots.  The mats were topdressed lightly where necessary and I am pleased with their appearance and feel as our "off-season" approaches.  We had to completely replace two mats and I am sure the new ones will be readily noticed and used more frequently when available.  Thank you in advance for your cooperation!

Remember when we were kids and your mother would fuss at you to be quiet and not run through the house, especially the kitchen when she was baking a cake because she didn't want the cake to fall?  Well, this past Wednesday (October 23rd) my cake fell.  Let me explain.  Tough Day is supposed to be a very difficult golf challenge.  Like a mad scientist I stretch the golf course to its maximum yardage and locate holes in positions where creativity and imagination are required to unlock the puzzle on how best to approach them.
Not to mention the golf course is firm and fast and the greens are double mowed and rolled to provide a smooth and terrifyingly fast putting surface.  In other words there are several ingredients that go into the challenge that is Tough Day.  The staff worked diligently all morning preparing the golf course and cleaning the property of divots, leaves, pine needles, etc. and then...to say the wind began to blow would be the understatement of the year.  As the cold front which brought us yesterday's frost approached the wind began to quickly undo everything my staff and I worked so hard to create.  Like a mother wanting to yell at the kids to be quiet and stop running through the kitchen I could only watch as my cake fell.  The wind was so strong at Carolina this past Wednesday I know it added at least 10 shots to the golf course.  Attempting to strategically place the ball on the proper portion of the green from the fairway along with any other strategy was thrown out the window and the day became a survival test, just getting on the greens was a minor victory...until you saw what kind of putt you faced!  Needless to say, the wind alone would have made normal pin positions and normal tee placements "tough day" so this year's Tough Day was extremely tough...but it was also fun!  I am already thinking about the setup for next year, Bwaahahaha!

The Tufts Archives and Grandma's Quilt!

Hello and welcome to "The Greenkeeper"! Today is Friday, October 4th and I have a couple of things to share with you today but before I do I wanted to point out an interesting fact.  There are several members of the PGA Tour and Champions Tour living in the Charlotte Area that are members of Carolina Golf Club.  Two of those individuals, Webb Simpson and Brendon de Jonge are both participating in the President's Cup matches currently underway at Muirfield Village Golf Club in Dublin, Ohio.  Interestingly Brendon is playing for the International team as he is originally from Zimbabwe and of course Webb is playing for the United States thus Carolina can't lose.  Fun fact of the day!

On August 28th I received a letter from Audrey Moriarty, Executive Director of The Tufts Archives in Pinehurst.  In conjunction with the 2014 U.S. Men's and Women's Opens next year at Pinehurst No. 2 the Tufts Archives and the Donald Ross Society want to emphasize the extent of Mr. Ross's contributions to classic golf architecture by displaying pin flags from a collection of courses Donald Ross designed.  The letter went on to state the flags will be displayed at The Tufts Archives in the Village of Pinehurst during the Opens and later become part of a permanent exhibit in the Archives.  I didn't hesitate to draft a letter of response and send a flag from Carolina.  A couple of weeks later I received a hand written note from Audrey informing me she received our flag and thanking the members of Carolina Golf Club for our contribution.  She also stated we were in very good company as the first two respondents of their request were Dornoch and Carolina Golf Club!

Hopefully you recall my post on August 30th titled Headaches, Favors and Stewardship! and the section where I shared a question I received from a member and my response with regards to some of the things we do in my department to be good stewards of the environment.  I wanted to touch on another point from that particular member's email as this person mentioned the renowned courses he has played and their multi-textured look.  To the novice it may seem as if we only have three or four types of grasses growing on the golf course.  The putting greens are bentgrass, the tees, fairways and roughs are bermudagrass and the natural/native areas are fescue and broomsedge but what if I told you we have over one dozen different grasses growing on the golf course!

The putting greens were established with two bentgrasses.  A 50/50 blend of A1 and A4 were seeded into these greens.  Although both varieties come from the same parent material they are indeed genetically different thus each contributes its own characteristics to the sward.

The tees, fairways and roughs consist of 4 different types of bermudagrasses.  There is the hybrid 419 or Tifway bermudagrass planted in 2008.  We also have Celebration bermudagrass, a more shade tolerant variety growing in several places throughout the property.  There is common bermudagrass in various patches and swaths as it has regenerated itself over the past five years and then we also have what is known as off-type.  Off-type is a term used to characterize a genetic mutation which commonly occurs in hybrid bermudgrasses.  The mutation is typically caused by a recessive gene from the parent material and off-types in 419 bermudagrass are widespread.  They are easily identified by their fine texture but lighter shade of green compared to the darker hues associated with 419.

The irregular shaped patches in the two photos below are examples of off-type bermudagrass formation within a stand of 419 bermudagrass tees.

From a distance these irregular shaped areas of different colors and sometimes different textures give a mottled appearance similar to an old quilt.  In fact, mottled turfgrass swards are very indicative of older golf courses because over time this is the natural selection of things in nature.

Our natural/native areas also have a similar appearance with sheep fescue, hard fescue and chewings fescue growing among bluestem, side oats gramma, blue gramma and broomsedge.  The two photos below show the bluestem and side oats gramma growing together in a large section of fine fescue.  This area is located to the left of the 14th tee.

﻿﻿
﻿
I hope this helps everyone have a greater understanding of the types of grasses we grow and maintain on the property.  We truly are multi-textured like many other classic American golf courses and my goal as always is to produce the highest quality playing surface possible.  Enjoy the weekend and the President's Cup matches.

Posted by Matthew Wharton, CGCS, MG at 1:00 PM No comments: