Hello and welcome to The Greenkeeper!  Today is Monday, May 24th and Phil Mickelson just won the 103rd PGA Championship at Kiawah Island to become the oldest player in golf history to win a professional major championship!  Did that really just happen?  Yes it did, and it was incredible to watch the theatre unfold on a Pete Dye masterpiece in front of thousands of fans eager to enjoy life again. 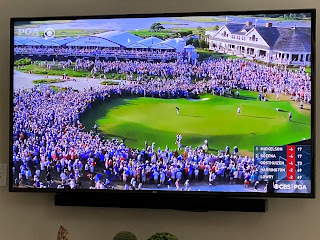 What an incredible scene it was to watch the masses encircle the 72nd hole and create an ambiance for this historic moment.  Other than Tiger's win at the Tour Championship at the end of 2018 you might have to go back a couple of decades to find scenes like this, I seem to recall this was a common occurrence at the Open Championship in my younger days.

But enough about Phil, his bombs, his calves, and his thumbs.  Let's talk about the golf course at Carolina Golf Club!  After three consecutive years with rainfall well above average, the pattern shifted since spring's arrival and firm, fast playing conditions have returned.  Through the first three months of 2021 the golf course had received over 14 inches rainfall, once again putting us on pace for a fourth consecutive year with nearly 60 inches.

But since April 1 we have only received 3.22 inches and there isn't a strong chance of rain in the immediate forecast.  With a little more than 1.5 inches in April and about 1.5 inches so far in May the course has been able to dry out, firm up, and play like Donald Ross intended, with the ball running.

#Drought conditions have expanded in North Carolina to 66% of the state. Stayed around 40% in South Carolina but the moderate drought has expended there. With a week of hot dry weather ahead next week could be worse. #cltwx #ncwx #scwx #wcnc pic.twitter.com/ub0dzC8N4P

And to add to that, the cool spring temperatures have permitted us to push the greens as it relates to moisture content each day providing a firmer surface that resists ball marks and enhances putting speed.

Now, the graphic above also tells another story.  This is the third consecutive cool spring, but this one is absent the rainfall of the two previous years.  Although cool and dry is great for bentgrass, it means our Bermudagrass tees, fairways and rough are slow out of the starting gate.  This includes the practice tees and short game area too.

Bermudagrass likes warm, humid conditions and we've had neither most of this year.  On top of that, we did encounter late season frosts in April and we set a record low just two weeks ago during the Member-Guest.  This translates to rough that is still slow to thicken and an absence of color in high traffic zones.

If you played this past weekend you may have noticed the return of small stakes to help direct cart traffic as the golf course is unable to recover without proper growing conditions.  On the plus side, these same conditions inhibiting the growth and recovery of Bermudagrass is helping create those fast playing conditions because lush turf is slow.  So there are plusses and minuses with every situation.

In other course related news, we will be adding bunker sand to those most heavily played from starting next week.  The Green Committee has discussed several plans for immediate and long range improvements to the golf course, especially relating to bunkers and cart paths and we ask your continued patience as the final details are ironed out.

Also, I want to remind you we will not be aerifying the putting greens or the fairways immediately after Memorial Day.  You may recall we did so beginning in 2018 as a result of the timing of the U.S. MidAm in September that year.  We continued the practice each of the past two years, with only closing two days in 2020 because of the pandemic.

We determined the greens would benefit more from a traditional fall aerification and adjusted the schedule for 2021.  Fairway verticutting, aerification and topdressing will take place July 6-9 and greens aerification will take place following Labor Day.  We will most likely "vent" greens on Maintenance Tuesday next week to alleviate the stress of  close mowing and rolling associated with tournament conditions, but you can rest easy you can continue to enjoy them as summer gets underway.

Of course I would be remiss if I didn't mention our thoughts and prayers have been with Green Chairman Brett Boner since his accident and we are thrilled to learn he has recovered well enough to be released and return home to his family!  Get well soon Brett! 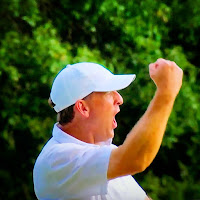 Posted by Matthew Wharton, CGCS, MG at 10:47 AM No comments: