No Cause For Alarm!

Hello and welcome to "The Greenkeeper"!  Today is Friday, June 30th, where does the time go.  When we were last together I was introducing a new assistant, new intern, and we had just wrapped up our annual small tine pre-summer aeration on putting greens.  Since that time it rained nearly 6.5 inches, including one stretch last week where we received rainfall seven consecutive days (more on that later).  We even endured a severe flash flood event the evening prior to our Friday Guest Day back on the 16th.  Somehow despite all the wet weather, we managed to spread 300 tons of sand on our tees, fairways, and approaches and install 10,000 square feet of new sod.  Let's take a look.

After experimenting with topdressing fairways in the summer of 2014 CLICK HERE utilizing all the old bunker sand that was replaced the previous winter, we committed fully to topdressing fairways on a regular basis going forward.  New equipment was acquired in 2015 to assist with this intensive cultural practice and since that time we've now applied approximately 60 tons of sand to every acre of bermudagrass growing on our tees and fairways.  I mentioned earlier about all the rain we've been receiving but we managed to complete what is the first of three applications scheduled for this season just before the heavy stuff helped wash it in.


Our next application is scheduled for the first full week of August and our final will coincide with September greens aeration.

Recently the Greens Committee decided to convert a small portion of the natural/native area behind No. 13 green to bermudagrass.  This was completed early last week when we installed several pallets of sod to the right of No. 13 green down below the Championship tee of No. 18.  This change was made primarily for pace of play, but it also will permit us in the near future to create a closely mowed area around the green that ties directly into the neighboring teeing ground similar to those found on other portions of the course.

Since this conversion only required a small amount of turf, we took advantage to obtain a full load and make repairs to random areas throughout the property.  Whether it be an area severely shaded underneath trees or just worn out alongside the cart path edges, the team worked hard to improve the overall condition of the course.

Last of new sod going down today. Instructing Intern Zac on importance of #greensideup but not much green. 🤔 What you think @Greensideup17? pic.twitter.com/aJTzL6hOdm
— Matthew Wharton (@CGCGreenkeeper) June 22, 2017

Other projects in the works is the mowing of our warm-season native areas.  This removal of old growth helps to remove weeds and other unwanted vegetation and make room for this coming season's new growth.  A couple of passes with the old bush hog and then a quick collection and removal of the debris and we are all set.

Earlier I referenced the amount of rain this month.  Can you believe we've had more rain in June 2017 than we received all of June through August in either 2015 or 2016?  That's right, the past two summers have been very dry with little rainfall, but this year has been anything but with over 20 inches rain falling on Carolina Golf Club since April 1st!  The lush conditions everyone has recently been talking about is the direct result of abundant rainfall since the bermudagrass began to grow.  I even had one member tell me he knows I prefer to be in control of the water but the course never looked this good when I was in control.  What can I say, beauty is in the eye of the beholder.

There's an old saying about having too much of a good thing and it's true in the world of turfgrass, especially when it comes to water.  The abundant rainfall that has brought deep, lush conditions to our tees and fairways has given me slight pause for concern when it comes to our putting surfaces.  Our roots are not as deep at this time as past years.  Why?  It's quite simple really, if you were a turfgrass root would you make the effort to dive deep searching for moisture when it's always supplied in abundance every time you turn around.  Wet springs make it challenging to grow deep root systems and this has been one of the wettest springs I can remember.  Our rainfall total in April was 6.69 inches, May was 7.07 inches, and with a few hours remaining in June our total is currently 6.38 inches.

Now, the good news is despite a lack of depth to our root systems we have more root mass and density than ever before.  One of our new products we've been using since last summer is a vermicompost extract and it's been university tested and proven to increase root mass.  The photos below definitely show an abundance of vibrant roots. 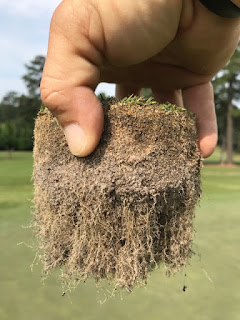 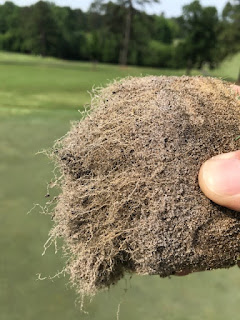 It will be interesting to see how everything plays out over the remaining months of summer with this significant extra volume of roots.  Frankly, I'm not overly concerned about the depth being slightly more shallow compared to years past simply because we have so many more viable, healthy roots than ever before.

So back to last week's rain.  For seven consecutive days we endured cloudy skies, very humid conditions, and measurable rainfall.  The weather pattern broke at the beginning of this week and we've all enjoyed Chamber of Commerce type weather with lower dew points (low humidity) and comfortable temperatures.  It's important to keep in mind turfgrass is a living, breathing thing and as such its vitality is affected by a myriad of factors including but not limited to wind, sun, rain, drought, heat, cold, and more.  As a result it is not uncommon for bentgrass to react negatively when exposed to such rapid changes in climate like we just experienced.  We encountered some higher than normal wilt pressure brought about by the extreme low dew points and as a result some turf lost its color turning brown. 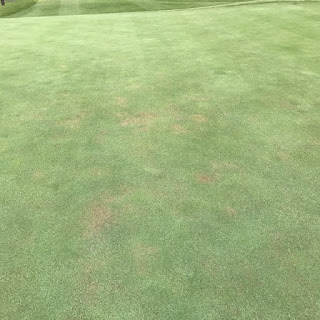 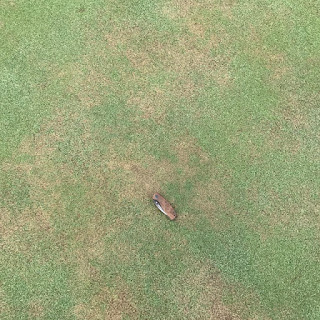 The plant is still alive and new leaf blades are being generated by the crown.  Putting quality is not impacted as the discolored turf areas provide the same smooth ball roll, it just looks different. Although wilt has happened before, many times, I understand some of you may be alarmed but I assure you all is well.  Besides, the USGA has been telling us for years that brown is the new green.   ;)

Hello and welcome to "The Greenkeeper"!  Today is Thursday, June 1st and much has happened since my last update.  In the past month we've hosted two major club tournaments, aerated greens, I've welcomed a new assistant, and started Jedi training of a new intern.  Let's get caught up and along the way I may share a few more items of interest.

Last time I mentioned how April was the warmest ever in Charlotte history and it was a wet month with well over 6 inches rain (LAST POST).  Would you believe May was even wetter!  That's right we had just over 7 inches (7.07") rainfall at Carolina Golf Club in May.  With meteorological spring in the books it's refreshing to know soil moisture levels are not at a deficit and the irrigation lake is at full pond as summer officially begins.  Also, with that much rain last month it's amazing we completed both the Member-Guest and Member-Member events without any negative weather related impacts. We definitely dodged a few bullets those two weekends.

I hope each of you will welcome the newest addition to the greenkeeping team, Assistant Superintendent Matt Claunch.  Matt was born in Baltimore and his family relocated to Charlotte when he was very young.  He's a graduate of Charlotte Catholic High School and earned a Turfgrass Management Certificate from Penn State University in 2015.
His previous golf course experience includes both Providence Country Club and TPC Piper Glen locally.  The past two years Matt has been working in South Florida with a brief stop at The Floridian before most recently becoming 2nd Assistant Superintendent at Pine Tree Golf Club in Boynton Beach.  For those of you that enjoy the course related information provided on Twitter you can find Matt @MCClaunch where he has a great eye for detail and promoting the course and team in a positive manner.

Also new to the team in Zac McMurry.  Zac is from Kings Mountain, NC and just completed his first two semesters at Catawba Valley Community College where he studies Turfgrass Management. Please help us welcome Zac to the Carolina Golf Club family!
If you were paying attention then you already read a glimpse of everything the team accomplished this past Tuesday.  Greens were core aerated (quad tines) with cores removed and rolled for smoothness.  This pre-summer aeration has always been critical to determining the level of success we experience each summer.  Why you may ask?  Simple, oxygen is critical to life and these holes alleviate a lot of stress we impart on the greens during the last few weeks of May with all our tournament preparation (mowing, double mowing, rolling, etc.).  And as you can see, after just 48 hours the greens are well on their way to a speedy recovery.

Shared view from above & RT of No. 15 countless times, but you've never seen it like this before @CGC1929. Tuesday Maintenance Day update. pic.twitter.com/7WG4yx7M7Y
— Matthew Wharton (@CGCGreenkeeper) May 30, 2017

So what's next you ask?  In the next 15 days we will be converting the area immediately adjacent to number 13 green to bermudagrass with sod.  At the same time we will sod other places such as cart path edges and other high traffic areas where the bermudagrass turf doesn't meet our standards.  Of course with this being the beginning of summer the fans will be installed very shortly.  There will be new ones this year at both the Putting Green and Chipping Green along with hole Number 2.  We will be converting the area immediately right of the tee complexes at hole Number 9 to fescue.  We will start by treating the existing bermudagrass with non-selective herbicide so don't be surprised when this area turns brown.

Men's Guest Day is 15 days away (June 16th) and then immediately following the U.S. Open at Erin Hills we will be closed for two days for fairway aeration (June 19th and 20th).  It's a busy time but the mood is upbeat and positive in Golf Course Maintenance with fresh blood and projects to keep things exciting.