Hello and welcome to "The Greenkeeper"!  Today is Tuesday, April 4th and it's the best week of the year for golf lovers.  That's right, it's Masters week!  But before we discuss egg salad and pimento cheese sandwiches, Rae's creek, and the likely contenders for this year's green jacket, let's look back at what's transpired on the course the past few weeks and also take a peek ahead.

Greens aeration lasted three days this year thanks to Mother Nature's sense of humor.  After enjoying the warmest February ever in Charlotte, March turned out to be... March.  It's a transitional month with winter departing and spring arriving, and you can get some crazy conditions like temperatures in the low twenty's immediately after aeration.  Day 1 started with a frost delay of nearly two hours.  We have 22 bentgrass surfaces and we managed to aerate 17 of them before steady rain halted operations that afternoon.
Day 2 dawned with lingering rainfall that finally ceased about 9:30 am.  Once we were able to resume operations we completed aeration and core removal and topdressed 12 of the 22 greens before dark. We wrapped up topdressing on Day 3 without ever delaying play, of course only one foursome braved the freezing conditions that day ;)
Despite the challenges and the delayed recovery brought on by the cold temperatures in week 1, I'm happy to report our putting greens are now ready for the exciting season ahead.  In fact, our new fleet of walking greens mowers arrived just in time as the turf pushed through the topdressing.  The golf course has been outfitted with new flags, new flagsticks, and refurbished cups as we welcome spring and the new golf season ahead.

One thing you will soon see soon is modifications to the mowing patterns on the golf course. Fairways will become more narrow in some places while closely mowed green surrounds will become enlarged.  Actually there are a handful of closely mowed green surrounds that will shrink to only a collar width, but by and large there is more expansion around the greens than contraction.  These changes are all part of the USGA's recommendations for how we present the golf course to the competitors in the 2018 U.S. Mid-Am. 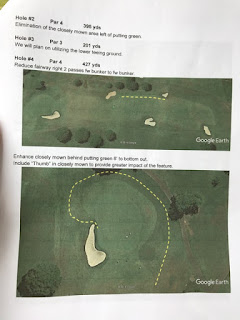 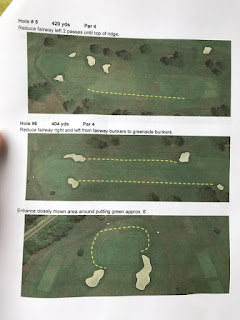 We are implementing the suggestions this season and allowing the USGA to review them when they return this fall.  On a side note, these mowing alterations may have an impact on our course rating. Head Golf Professional Knox Martin has been in contact with the CGA and they will be on site to re-rate the golf course in a couple months taking into account the changes to hole number 7 (additional fairway bunkers and mounds) as well as these new mowing patterns.

Yesterday saw us fertilize nearly 100 acres of bermudagrass turf.  Rather than take multiple days both now and later this spring to accomplish our objective I opted this year to have the course bulk-spread courtesy of Harrell's LLC.  The product we applied yesterday will provide a prolonged, slow feed to our bermudagrass turf over the coming months meaning you won't encounter us applying it and disrupting play.

Now that we've managed to feed the property it's time to begin mowing regularly and before things get too crazy my team and I still need to install our anchor poles and trench power to the new fan sites mentioned last time.  We also plan to enhance some drainage while the trencher is on site for the power runs.

And with that out of the way it's time to focus our attention on a little "toonamint" just down the road. When you consider Dustin Johnson is not just the current number one player in the world with three consecutive victories, he's also a South Carolina native.  Why is that so important you ask, have you noticed that state's current hold on national championships?  It would be hard to bet against him.
But when you consider Jordan Spieth has competed in 3 Masters and never finished worse than second, it would be hard to bet against him too.  That's why I'm taking Lee Westwood (huh?!?!).  Don't ask me why, his name just popped into my head as I was making another pimento cheese sandwich. Enjoy the Masters!

P.S., Still waiting for my invitation to play Augusta National from 1988 Masters Champion and two-time World Hickory Open Champion Sandy Lyle.  If you're looking for someone to join you for a quick round I'm just up the road.  Just saying ;)