U.S. Open, Spared, Necessary Evil and It's Not Me It's You!

Hello and welcome to "The Greenkeeper"!  Today is Wednesday, June 13, 2012 and tomorrow begins our nation's golf championship as conducted by the United States Golf Association.  The U.S. Open by its very nature (over 9,000 entries this year) gives us golf fans some of the most compelling story lines and drama ever witnessed over 72 holes and this year is already no different.  Whether it is 42 year old Dennis Miller, qualifying on his 12th attempt or the 14 year old amateur Andy Zhang, originally from China (now resides at the David Leadbetter Academy in Orlando) making the field, I am confident once balls are in the air tomorrow morning you will not want to miss anything!  Added bonus this year, with the event being contested in California we East Coasters get 4 days of prime time golf :)

However, I did not come here today to talk about the U.S. Open.  I have some important information regarding the agronomic practices on the golf course and their schedule but before I go there I must tell you we have received a grand total of 0.34 inches rain the past 48 hours.  That's not a misprint!  Why is that significant you ask, because over 3 inches have fallen in the Charlotte metro region over the last two days.  My counterparts at both Carmel C.C. and Myers Park C.C. have reported to me receiving between 3-3.5 inches total going back to Monday with both courses getting deluged last night with over 2 inches rain.  Our total in the gauge this morning was 4/100ths!  This is a shining testament to the power of Mother Nature and the true meaning of "scattered showers and thunderstorms"!

Now back to our regular programming.  Aeration.  I said it.  Aeration is a process by which golf course superintendents operate machines better suited for medieval torture than turfgrass management across pristine, finely manicured golf courses during prime golf season in order to obliterate the conditions and irritate golfers. 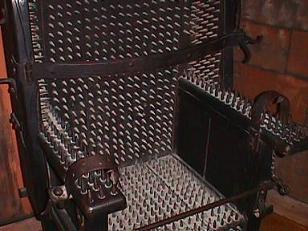 Just seeing if you were paying attention!

Aeration is a mechanical process that creates more air space in the soil and promotes deeper rooting, thus helping the grass plants stay healthy.  Just like you and I, grass plants need oxygen in order to survive.  In order to grow and maintain quality turf you have to have deep, healthy roots and good roots demand oxygen.  Roots get oxygen from tiny pockets of air trapped between soil and sand particles and over time, the traffic from golf cars, pull carts, mowing and other maintenance equipment compacts the soil (especially heavy clay such as ours).  When the soil becomes compacted, the air pockets on which the roots depend are crushed, and the roots are left gasping for air.  Without the needed oxygen, the grass plants eventually die and the turf fades away.  The bottom line is aeration is a necessary practice (albeit a time consuming, labor intensive one especially in the context of fairways and roughs) and I sincerely hope you understand I would not perform the task if I didn't already know it is going to make the conditions of our golf course turf better.

Which brings me to my next topic...why  is "The Greenkeeper" here?  In other words, why do I take the time to make available to you information pertaining to the condition of the golf course.  "The Greenkeeper" began as a monthly contribution to the club's newsletter with the very first one appearing in June 2005.  As the club's newsletter was phased out a few years later in favor of direct member emails "The Greenkeeper" became a regular email to the members from yours truly starting in March 2010.  On November 21, 2011 "The Greenkeeper" appeared for the very first time on blogspot.  Why?  For you and your benefit!  Emails are easily ignored and/or deleted and by moving "The Greenkeeper" to a permanent home on the web, posts are now archived and still readily available to you.  Also, the format of blogger makes it much easier for me to include photos which I believe are valuable contributions and greatly assist in helping you, the reader better understand the message.  The point is, I have always been asked to communicate what is going on at the course and why.  It is important for you to have an understanding of what it takes to maintain the golf course and to maintain it to your standards.  Members armed with the knowledge of agronomic practices taking place and when they are scheduled are typically much happier members because their expectations of the golf course are not distorted.

Now you ask what is that supposed to mean...all to often each year there exists a member or group of members disappointed to discover the golf course isn't as "clean" or "manicured" as they expected (or remembered since their last visit) because they failed to read the emails or forgot that aeration was scheduled for that week.  I apologize for not making sure each and every one of you fully know and understand what is happening, when it is happening and why but I and the golf shop can only do so much to ensure you are aware of what is scheduled at Carolina.  For the future I have proposed a modified aeration schedule (cool-season and warm-season grasses) to the Greens Committee for approval.  If approved we will know a year in advance when all aeration practices will be scheduled and I will make it a point to publish the "Aeration Calendar" early next year so everyone can save the dates and schedule their golf accordingly (assuming you read the blog).