Hello and welcome to "The Greenkeeper"! Today is Friday, March 30, 2012 and it is my responsibility to inform each of you what has happened most recently in regards to our collars and what the plan of action is going forward.  When Benjamin Franklin said in 1789, "nothing is certain but death and taxes" he obviously had no knowledge of the game of golf or the profession of greenkeeping.  However, his famous phrase fits perfectly with my profession as we deal with dead and/or dying grass more frequently than desired.

I believe it is safe to say nearly everyone has been surprised by the above normal temperatures (not only this winter, but most recently this month) and the early arrival of late, spring-like conditions.  Bermudagrass has greened up earlier than any of us can ever remember and each day the temperature gets warmer and warmer (forecasts as of this morning are calling for temperatures this coming Monday, April 2nd to reach 88 degrees).  I am frequently asked by members if I am liking the weather or if the weather is good for the course.  Although I enjoy the spring like conditions and am thankful this past winter was considerably more comfortable than the previous two, I am a firm believer that things in nature work better when things occur within the normal range.  In other words, whether it be trees, shrubs or turf those plants have a much greater chance of survival if they are not asked to endure the abnormal.

So what does all this mean about the collars you ask.  When we aerate greens each year in the early spring the bermudagrass is still dormant (usually).  Greens are aerated completely, meaning the collars also receive some attention and of course the topdressing and brushing also transcends into the collar region.  It is important to note the collar, or apron as some refer to it is a transition zone between the fairway/approach into the putting surface.  It is almost impossible to apply a treatment to the putting surface that does not also get applied to the collar when making the effort to treat the entire putting surface.  Having said that, let's review what happens when bermudagrass goes dormant then later wakes from its dormant period.

At the conclusion of summer as the days begin to shorten bermudagrass begins to store energy from photosynthesis for later use.  Like a squirrel hoarding nuts for the winter, the bermudagrass turf stores away the energy it will need for the spring green-up period (post dormancy transition).  It has been said that bermudagrass uses its last "gallon of gas" to wake itself from winter dormancy and thus the turf is in a vulnerable state at that moment.  This is exactly why we have already applied fertilizer to our tees and fairways about a month sooner than normal, to make nutrients available to the plant since the "tank is empty" at this time.  When we were aerating greens our collars were just starting to break dormancy and I was pleased to see so many green leaves looking up at me considering the cold winter injury we had endured the two previous years that required sodding.  As the past few days have gone by I have watched the collars decline rather than continue to fill in from their post winter hibernation.

Yesterday, I asked a colleague to stop by and give an unbiased "second opinion".  We toured the course together looking at the greens and collars and he asked questions about when we aerated the putting greens.  The two of us replayed the timeline of events like "Turfgrass CSI".  In conclusion, we determined the bermudagrass turf in the collar region was most likely at that vulnerable moment where it was unable to tolerate the mechanical stress imposed by the putting green aeration process.  You may recall I stated one of the reasons the greens are always so good when we aerate is so they are better able to withstand the mechanical stress of aeration.  Had our bermudagrass turf been completely dormant at the time of aeration this most likely would not have happened and if the turf had been fully greened up and actively growing this definitely would not have happened.

Unfortunately, neither of those scenarios describe the scene of our aeration this year and now we are faced with the task of either enduring the unsightly collar regions until the turf can fully recover and grow back or replacing the turf with sod.  I spoke with both Roger Wolfe (General Manager) and Stephen Woodard (Greens Chairman) yesterday and informed them both of everything concerning this situation.  The three of us mutually agreed and my staff and I will be prepping the areas for new sod on Monday (sod is scheduled for delivery Tuesday morning).  I believe it will take us at least two days to complete the task.  With our upcoming schedule of events (Master's Shootout, PGA Tour Qualifiers, Member-Guest and Member-Member) it is clearly apparent waiting for the turf to recover and regrow is not a viable option at this time.  Thank you for your understanding!

In other news I wanted to introduce to you some other new faces you have probably seen working on the golf course. 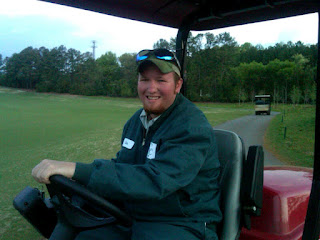 Cameron Phillips is originally from Douglasville, Georgia. His family moved to the Charlotte area eight years ago and he is a 2008 graduate of Porter Ridge High School in Indian Trail.  Cam started working at CGC on February 15th of this year. 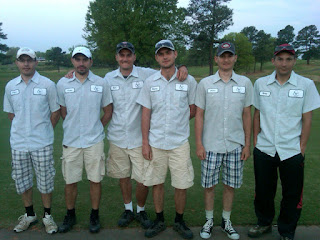 Hidden Creek Contractors from Bakersville, NC is once again providing our seasonal staff.  The six young men above are all from Moldova, a small country located in eastern Europe (between Romania and Ukraine).  They are here through the U.S. State Department and the World International Student Exchange (WISE) as part of their education.  Please make Grigori, Serghei, Igor, Dionis, Andrei and Vladimir or as we call them (Greg, Sergio, Igor, Dennis, Andy and Vova) feel welcome.
I hope today's update has helped explain the current situation with the golf course and you have a better understanding of what happened, why it happened and everything will be as good as new very shortly.  I will update you on the progress of the project next week and include some before and after photos.  Thank you again for your patience and understanding and here's hoping I will...
See you on the course,
Matthew Wharton
Golf Course Superintendent
Posted by Matthew Wharton, CGCS, MG at 8:44 AM